Twitter has revealed a couple of great features to help creators make money from their Twitter activity by leveraging their following. First is the capacity for users to charge their followers in exchange for access to extra content material â€“ Super Follows. The second is to form and join groups as per your interests. These changes are among Twitter’s most significant in a long time, and they also fit in with popular and effective patterns on other social networks.

Extra tweets, a subscription to a newsletter, or a badge indicating your support are all examples of chargeable content. In a mockup screenschot, Twitter confirmed a scenario in which an individual pays $4.99 per month to receive a series of benefits. introducing Super Followsâ€”a paid monthly subscription that supports your favorite people on Twitter AND gets you access to ::puts sunglasses on:: super Tweets

rolling out in US and Canada on iOS only â€¦ ðŸ˜ for now pic.twitter.com/Mb9sgxbw5F

However, not everyone is qualified to attach ‘Super Follows’ to their accounts. It’s suitable for users who:

If you have fulfilled all the aforementioned requirements, applying for Super Follows is quite straightforward.

In recent years, creators have increasingly relied on online platforms and tools to monetize their work. Twitter may take a portion â€” the business has been hinting at subscriptions as a possible revenue stream â€” but it doesn’t appear to have specified what proportion it will take. According to Twitter, users who apply for Super Follows will be needed to be on the shortlist. Users who have their applications accepted will be able to choose between a $2.99, $4.99, or $9.99 monthly price. 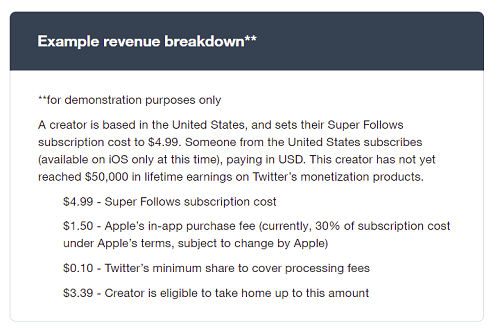 You can identify each tweet as either for everyday fans or paying followers if you have a Super Follows account. By clicking the purple-tinted Super Follows’ symbol, your followers may be qualified to join. This brings the conversation to a close. This might quickly turn into a lucrative source of income for you.